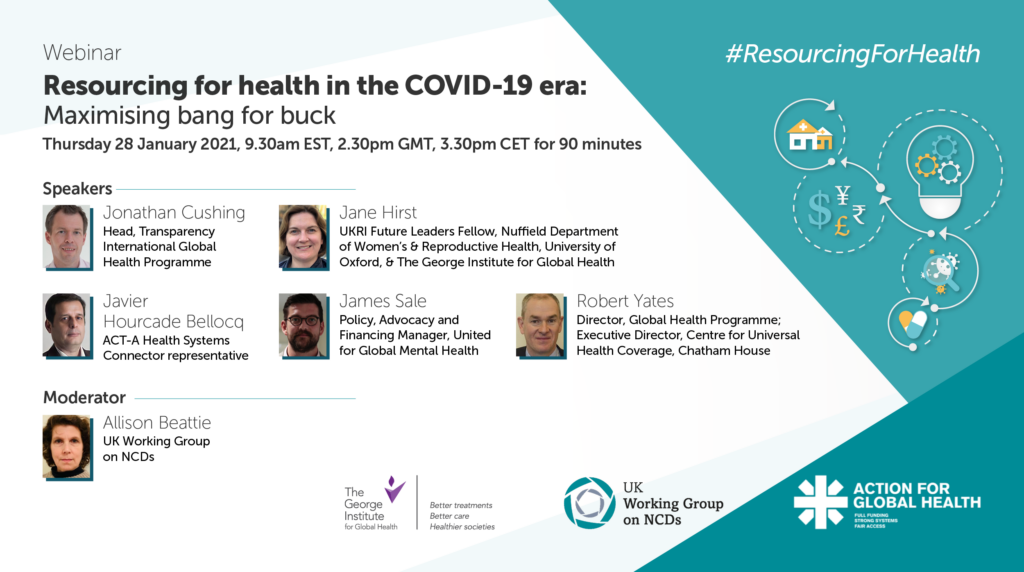 The resourcing – or lack of it – for global health is an ongoing and increasingly urgent concern. There has been a steady decline in overseas development assistance (ODA) for health over a number of years and, even within this shrinking pot, spending is often far from reflective of the global burden of disease: less than 2% of health ODA, for example, is spent on non-communicable diseases.

However, a disease-specific approach – pitching health conditions against each other in attempts to get a larger share of already constrained funding – has led to patchy progress, leaving many of the world’s most vulnerable people behind. And today, many hard-won global health gains are threatened by Covid-19 and the economic downturn that it has precipitated.

Action for Global Health along with co-hosts UK Working Group on NCDs and The George Institute for Global Health – held a webinar in January 2021 to discuss how current ineffective and inefficient approaches can be transformed to ensure better resourcing for global health.

The start of 2021 is a unique confluence of shrinking economies worldwide coupled with a vast injection of resources for Covid-19, so can this funding be spent in a way that achieves its primary task of tackling the pandemic while also finding and exploiting win–win health outcomes? This could be the opportunity of our generation to reset global health, creating a system that looks holistically across infectious/non-communicable disease and physical/mental health, within which resources are spent in smarter ways that maximise ‘bang for buck’.

The event had wide appeal, with participants joining from 33 countries (including Argentina, Barbados, the DRC, Ecuador, Egypt, India, Nigeria, Norway, South Africa and the United States) and with participants from government (including the UK’s Foreign, Commonwealth and Development Office), academia, the World Health Organization, World Bank and many NGOs.

The report of the webinar below by Katy Cooper, Chair of the UK Working Group on NCDs, highlights some of the key messages from the event. It ended with a clarion call for action by civil society neatly summarising what needs to be done:

Get political, find efficiencies, question what you read and see, investigate, get the information, link health to human rights, don’t get bogged down in systems and structures, think big, advocate and get noisy! – Allison Beattie, UK Working Group on NCDs.

Action for Global Health and the fellow webinar hosts would like to thank all the speakers for their contributions, and hope that the conversation started at this webinar can continue, including at the hashtag #ResourcingForHealth.

The full webinar is available to watch here with slides available for download here.

The webinar began with the moderator, Dr Allison Beattie (UK Working Group on NCDs), clarifying that the primary source of health funding is not funding from external sources such as ODA, but from domestic resource mobilisation: direct taxes on individuals/companies, indirect taxes (such as sales tax), non-tax revenue such as that from state-owned companies, and some external sources (such as loans from development banks).

Rob Yates (executive director of the Centre for Universal Health at Chatham House) strongly stated that universal health coverage can only be achieved through public financing. Times of crisis can be times of change – the UK’s National Health Service was established just after the Second World War; Thailand’s prime minister put 1% of GDP into health and scrapped user fees in the aftermath of the Asian financial crisis; and, today, South Africa’s President Ramaphosa is using Covid-19 to accelerate UHC reforms and the introduction of a national insurance scheme. Rob called on civil society not to assume that budgets are already stretched, and instead actively leverage the sudden awareness of the shortfalls in health systems worldwide to push for UHC: ‘I suggest that this is a massive opportunity for civil society organisations to be campaigning for equitable UHC reforms… Now is the time to be pushing much harder and faster for the benefit package to be extended to NCDs.’

This was echoed later in the webinar by Javier Hourcade Bellocq, who suggested that, although there is the fiscal space in middle-income countries to do much more towards UHC, too often there is insufficient political will. Civil society can do much more to call for greater political commitment: ‘The money is there but isn’t properly allocated!’

Three case studies, drawn from the networks of the co-hosts of the webinar, illustrated three ways in which even limited funds can be better spent: more efficient pooling of resources, tackling corruption, and making efficiencies across disease areas.

Javier Hourcade Bellocq presented on how the resources of the Access to Covid-19 Tools Accelerator (ACT-A) can be put to best use. ACT-A’s explicit ‘health systems connector’ pillar crosscuts across the other pillars of diagnostics, treatment and vaccines. The health systems connector promotes coordination rather than providing direct finance, focusing on ensuring that country plans are fully integrated and bottlenecks avoided, particularly provision of adequate PPE and oxygen in low-income countries. Civil society plays a role in all ACT-A’s work and people with long Covid must be meaningfully involved as part of this engagement – as was the case with people with HIV.

Dr Jo Keatinge (Foreign, Commonwealth and Development Office, UK) welcomed the discussion and called on all those on the call to think about efficiencies, including in how pandemic-response tools are delivered: ‘We really need to use [the Covid-19 crisis] to scrub the way that we are delivering services, making them as efficient as possible to meet those who are most left behind’, using a health system strengthening approach.

A key theme in the discussion was the need to drive political will, whether this is to encourage governments to spend more than the tiny proportion of GDP that many lower-income countries invest in health systems, to highlight how the unacceptable impact of corruption in the health sector, or to encourage governments to invest in women’s health. Civil society has an opportunity to use the heightened awareness of health during the Covid-19 crisis to make the case for action – so, in closing, each speaker was asked to suggest one way in which civil society organisations can advance the agenda for better resourcing for health:

This website uses cookies to improve your experience while you navigate through the website. Out of these, the cookies that are categorized as necessary are stored on your browser as they are essential for the working of basic functionalities of the website. We also use third-party cookies that help us analyze and understand how you use this website. These cookies will be stored in your browser only with your consent. You also have the option to opt-out of these cookies. But opting out of some of these cookies may affect your browsing experience.
Necessary Always Enabled
Necessary cookies are absolutely essential for the website to function properly. This category only includes cookies that ensures basic functionalities and security features of the website. These cookies do not store any personal information.
Non-necessary
Any cookies that may not be particularly necessary for the website to function and is used specifically to collect user personal data via analytics, ads, other embedded contents are termed as non-necessary cookies. It is mandatory to procure user consent prior to running these cookies on your website.
SAVE & ACCEPT